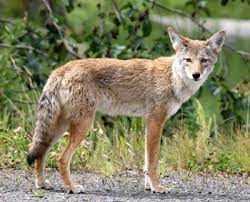 Coyotes have been seen in Sunnyvale, especially near park land. Further, recent reports of coyote sightings have occurred. Coyotes roam and are continuously relocating. The information provided is intended to educate and assist in identifying coyotes.

Coyotes generally live in packs, but hunt individually. The primary diet of a coyote consists of small mammals including rabbits, mice, squirrels, carrion and insects. Although infrequent, coyotes have been known to prey on domesticated animals in suburban areas, such as cats and small dogs. In an effort to avoid pets being preyed on by coyotes, keep cats and small dogs inside. Further, when walking your dog, use a short leash giving the appearance that you an you dog are one large adversary.  Human injury from coyote attacks is extremely rare. In the instance that you are in close contact with a coyote, there are a handful of ways to deter them such as making eye contact, making loud noises, and waving your arms to portray a large appearance.

Coyotes are typically most active at night, however, increased sightings can be correlated with their breeding season, which occurs from January through March. Coyotes range in weight from 25 to 40 pounds and live from 10 to 12 years.

Can coyotes be relocated?

No, Texas state law prohibits relocating coyotes, as they are a rabies vector species.

When to Notify Us